As our last day in Sarajevo, we used today as a reflection and final discussion regarding our experience in Sarajevo and the conclusions to be drawn from our stays in both Croatia and Bosnia so far.

The day began with writing and synthesis of ideas in our hotel. As a group, we discussed the differences in our initial individual ideas of nationalism we began the trip with to our concept of it now, following the evolution and further complexity of our thoughts. Once we identified these changes, we used this thinking to answer a few question on our own in our journals including how Bosnia and Croatian national identity differed and how both countries respectively symbolized and presented their nations. 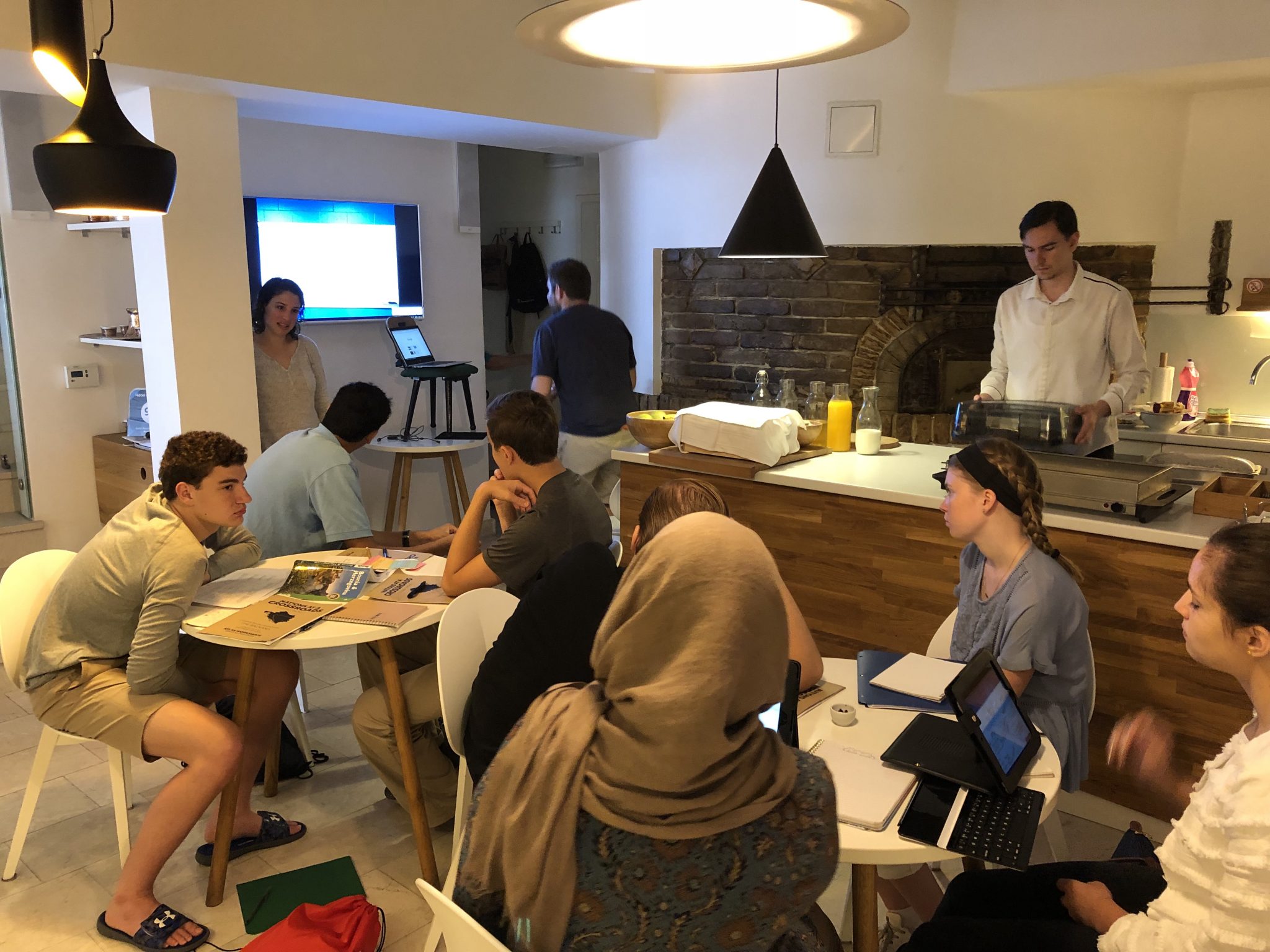 Following individual writing, we came back as a group in which we passed our writings around so that others could read and comment on our thoughts. Reading others perspectives on our learning so far, plus hearing their thoughts about mine allowed me to further grasp and build my understanding of the topics. Ultimately, this collaboration is the most important part of our trip – hearing and learning from others, both in our small group and from people in the countries we visit to form a rich comprehension and respect for the people and places we met, as well as the nationalist topic at the core of our travels.

Leaving our hotel, we had a quick walk to the city hall which is used now for galleries and exhibits on Sarajevo’s history. The building is a beautiful burnt red and deep yellow with both prominent stain glassed windows and large chandeliers. Walking through the exhibit on the history of Sarajevo, I soon noticed the importance of the Olympics, which Sarajevo held in 1984 when it was still a part of Yugoslavia. For this city, it is a symbol of pride and prestige, honor and prosperity. To the people, it is a time in which the world looked upon them and their beautiful city as a place of peace, and eight years before a violent war hit Bosnia. The importance of their time as Olympic hosts expresses the countries desire to find itself in a better place, and ultimately gain that prosperity again after recovering from the war. The city hall exhibit’s focus on this time is a reminder of this desire. 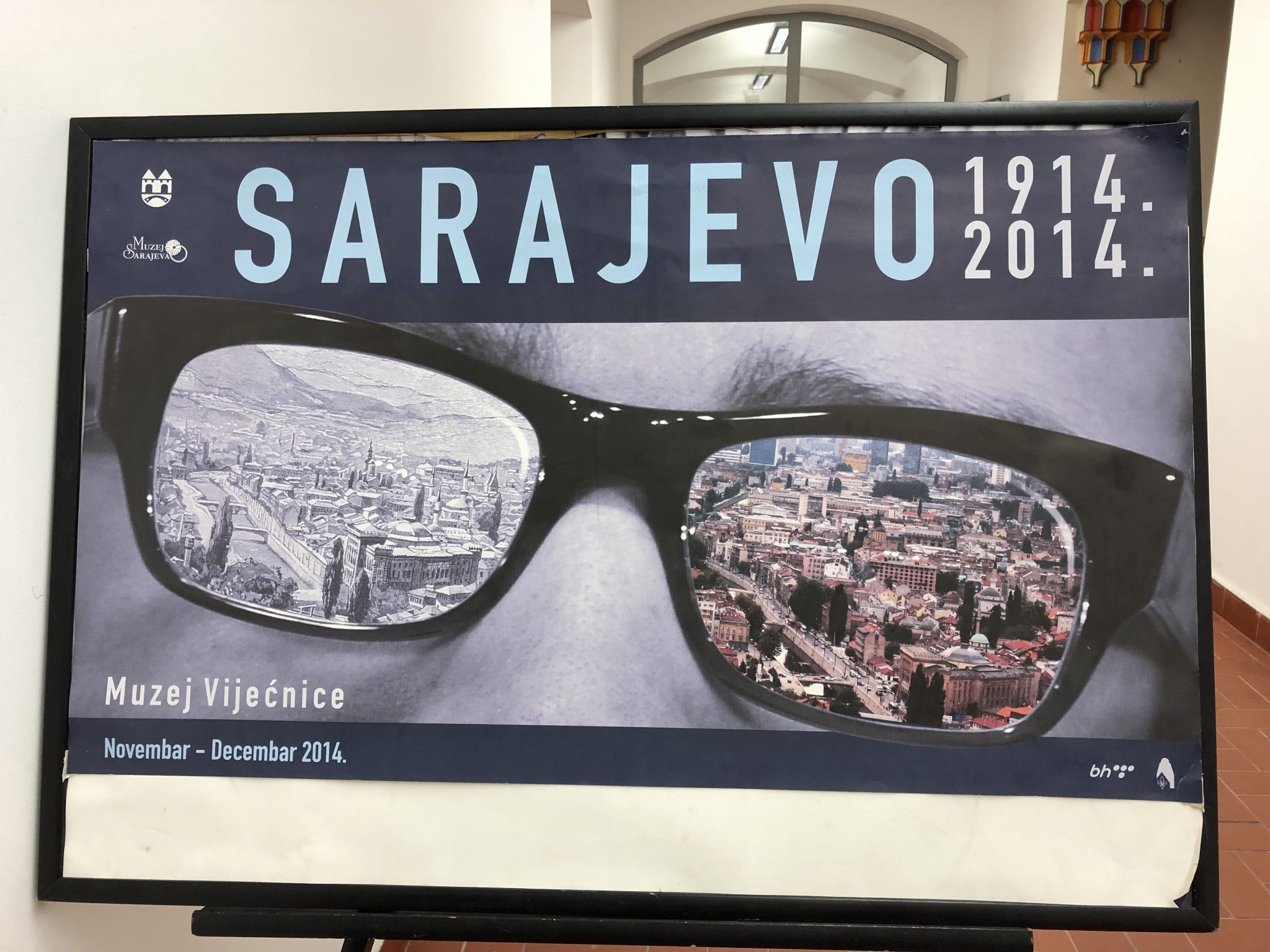 There, we met Mak, the president of the United Nations Association in Bosnia and Herzegovina. He took the group to lunch – a restaurant that served various styles of chicken, pasta, etc. Unfortunately, it began to rain as we left the restaurant. With raincoats and umbrellas, we made our way to a Catholic church close by. Our visit here represents the diversity of the city of Sarajevo and its critical role in the identity of the people living here. Within three days in the city, we visited a synagogue, mosque, and Catholic Church a few minutes away from each other. The rich religious diversity and blending of the people presents a country proud of its differences, though with a past that struggled because of them.

To avoid the rain, which at this point was coming down quite hard, the group, along with our friend Mak, made our way back to our hotel. Sitting in the lobby of our hotel, Mak spoke to us about his job, and his experiences growing up in Croatia and Bosnia, as well as answering some of our questions. His talk provided us with numerous insights into the conflict surrounding this region and how his organization at the UN is working to rebuild Bosnia and promote its youth as the future of the nation. A view and observation of his that stuck out to me, is his analysis of the concept of being a Yugoslav during and after the time of Yugoslavia. He often finds there is a strong nostalgia for Yugoslavia for it represents a time of relative prosperity and power for those living under it, while the smaller states that broke off ultimately became less powerful and more unknown. His observations made sense with what a few of the locals we have talked to since our trip started said. Finally, Mak left us with one important thing: “We(Bosnia)have lost a lot of time because of the conflict, left the country scarred. We lost too much time and need to pick up the pace, roll up our sleeves and build a foundation for prosperity.”

After Mak spoke to us, we were fortunate to hear from another local, a soldier during the war. Salem gave us insight into his times in the war, the war itself, and his view on Bosnia now. To me, he seemed vastly proud of Bosnia and his identity as a Bosnian, though found the religious and political identifiers used to define the nation as irrelevant to how he approached people and his country. To him, nice, honest people regardless of their religious beliefs and background could be someone he was happy to know. His love for his country showed while our discussion progressed, as he said to us “Without Bosnia I am a refugee. A foreigner everywhere”. In this way, he was proud and content with his Bosnian roots and all that comes with them.

The eye-opening talks with the two locals were followed by free time, in which Iman, Isabella, Dr. Jones, and I explored the city looking for local shops and sweets, while the rest of the group relaxed at the hotel.

To conclude our day, the group had dinner in this secluded room of a local restaurant which almost looked to be a former attic of sorts. The Bosnian food, which includes lots of meat, cheeses, and breads as quickly become one of my favorites as I continue to be pleasantly surprised.

Ending our day with ice cream, and another walk in the rain, I recall today as an accumulation of the stories we have heard, the people we have met, and the places we have explored so far. We truly have the great privilege of meeting the local people, hearing their stories along with their willingness to talk. Through continuing to dive into the cultures and the complex history of the region, we have gained a far greater understanding of this area. Although we are sad to leave Sarajevo tomorrow, we cannot wait for the next experiences that await! 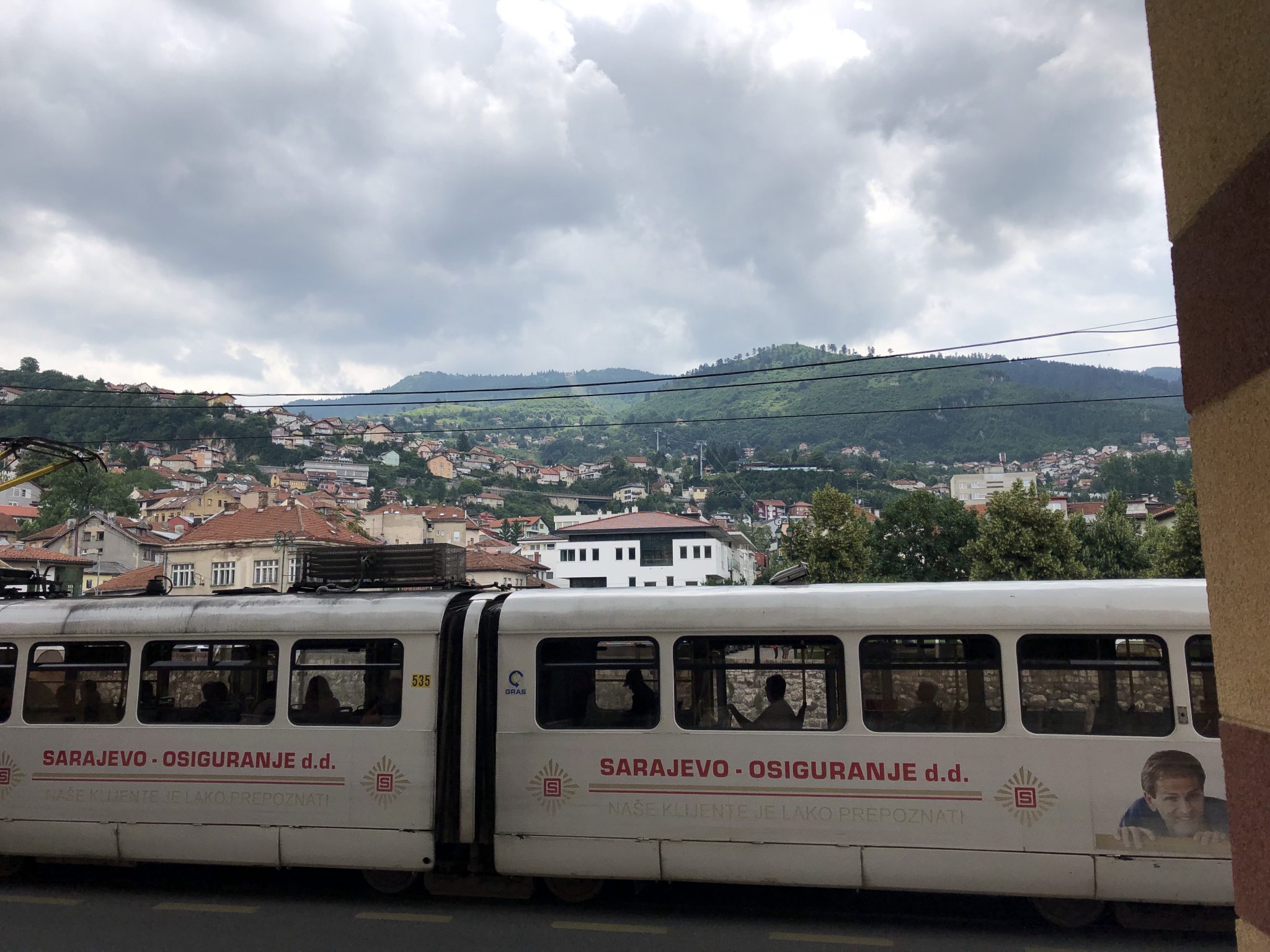