The first thing that we did today was wake up at 7:15 and carry our luggage down four flights of stairs. Yup, about as fun as it sounds. We quickly discovered that it was well worth it, though. As we went on a final walk through Mostar, we talked about the sights that we had seen there and the people that we had spoken to. Even after only being there for one day, we could see how different it was from Sarajevo, despite the fact that the two cities were only a few hours’ drive apart. The people, places, and culture changed wildly as we traveled through Bosnia. Our walk led us to a cafe, where we ordered some authentic Bosnian coffee. The coffee is an integral part of Bosnian culture, bringing hundreds of years of tradition together. From the way the beans are ground to how the coffee is poured, the techniques have been refined over the years and resulted in the perfect way to say goodbye to Mostar. 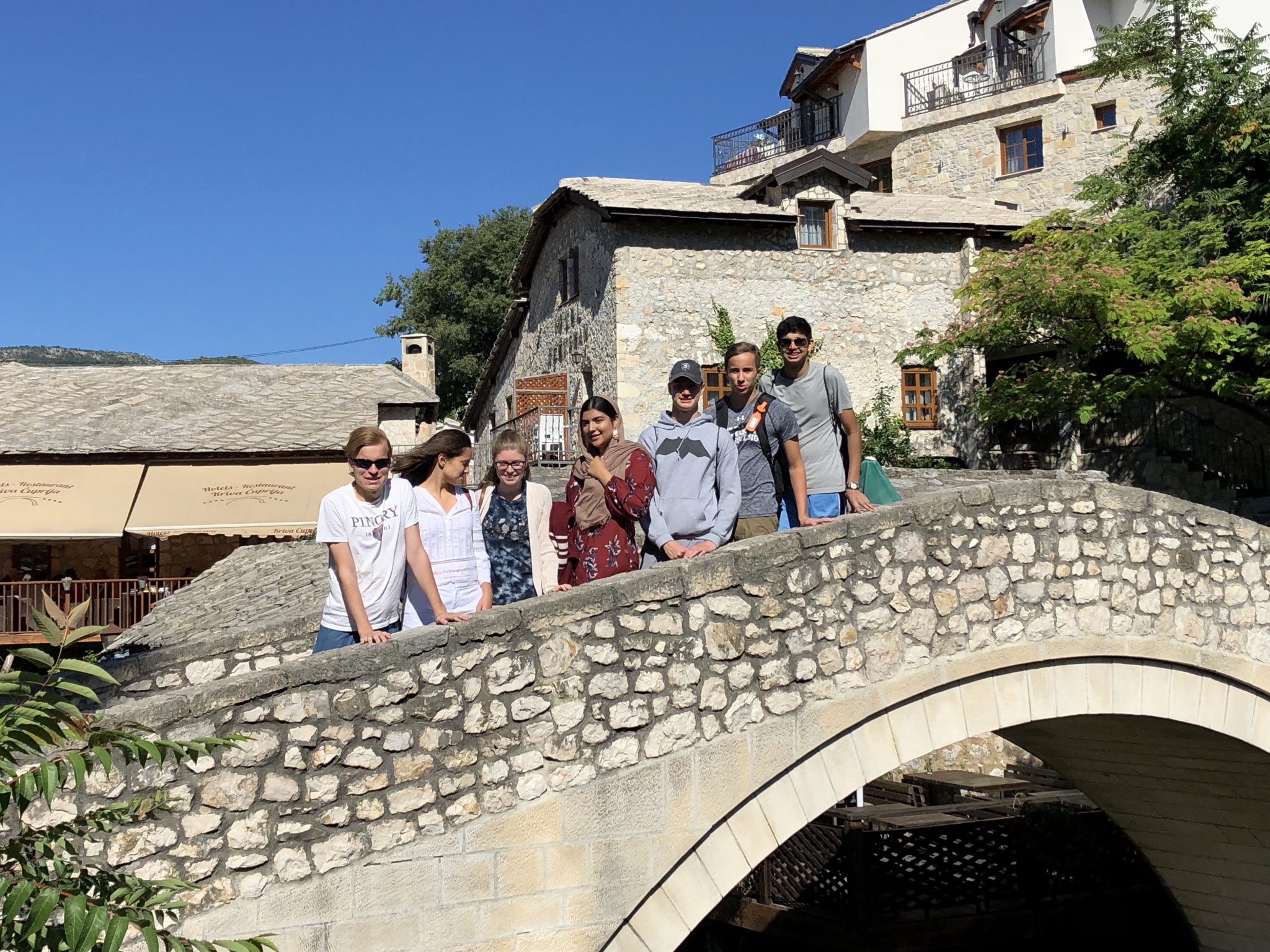 After packing up, we all piled in a van and started on our trip to Korčula. Our tour guide from Sarajevo, Taib, came with us to show us the important places that we would pass on our journey. Our first stop was in a town called Stolač. We visited a graveyard that dated back to medieval times, where one of the oldest noble families from Bosnia was buried. 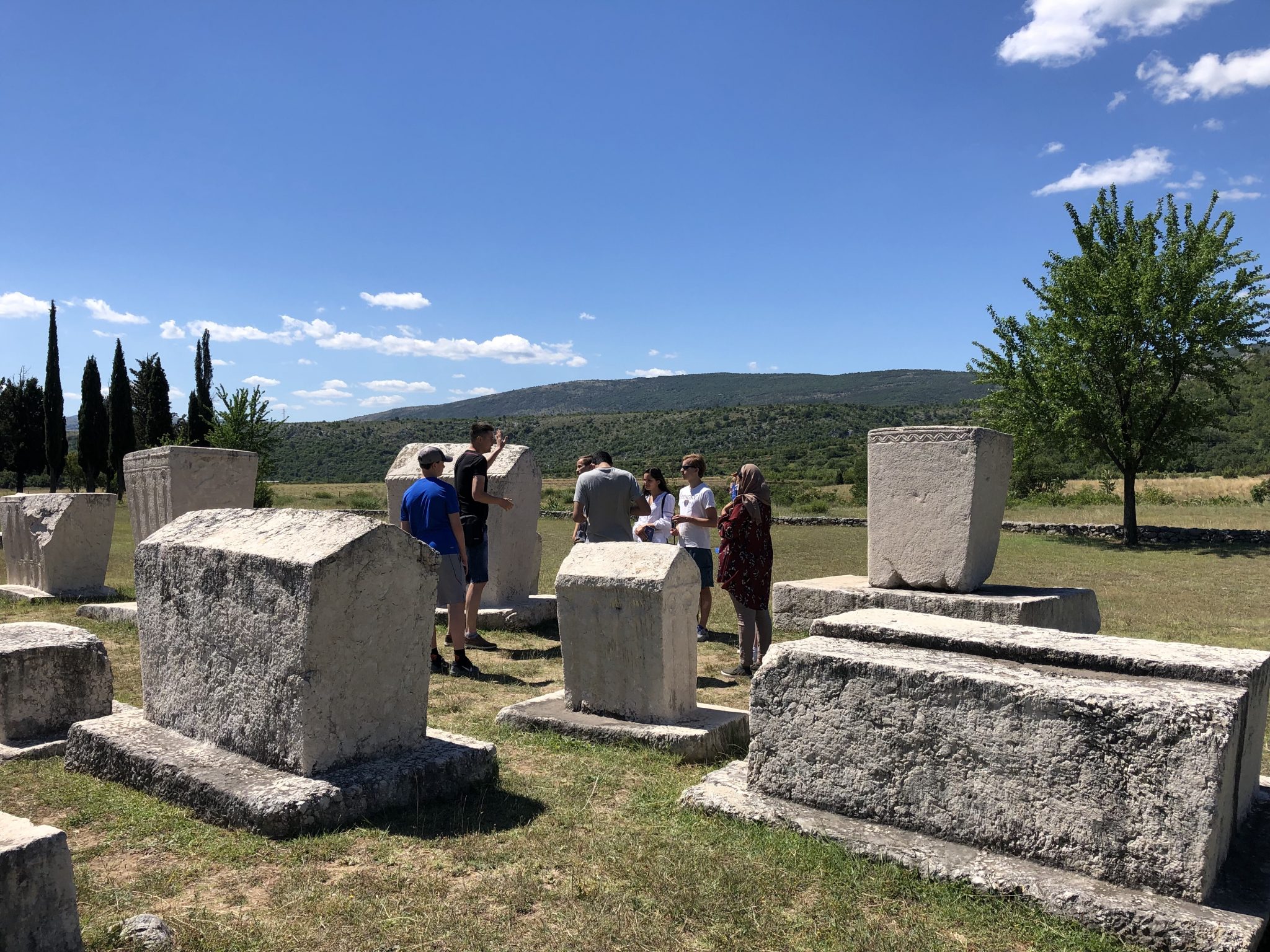 Our next stop was for lunch, at a place called “Restauran Han”. As we were waiting for our meal, Taib pointed out to our group a minor detail that we might have missed otherwise, and explained the importance of it. He showed us that the restaurant we were eating at had umbrellas that were advertising a water bottle company that was from Sarajevo, while a restaurant across the street was advertising a Croatian company. He told us that while the difference seemed small, it was actually just one aspect of a feud that had been going on for a hundred years or more. The Muslims in Bosnia are part of a group called the Bosniaks, and the restaurant we were sitting at supported them. The other restaurant supported a group called the Croats, which were Catholics. Although the Croats live within the political borders of Bosnia, they identify as ethnically Croatian. The separation between the Croats and Bosniaks is so strong that many restaurants, schools and even hospitals are segregated, with the religions split apart.

Once we were on our way again, we soon crossed the Bosnian-Croatian border, and started to see the landscape changing. The forests started to drop away, giving us glimpses of the beautiful Adriatic Sea, with a backdrop of towering mountains. When we arrived at the coast, Adam led us our “water taxi”, which was a motorboat piloted by a Korčula native and his son, who couldn’t have been more than 6 or 7, but looked like he knew what he was doing. On our way to the island, we got an in-depth experience of the Adriatic as it got on our faces and all over our clothes. Fortunately, the sun was more than strong enough to dry us off when we arrived in Korčula.

The first thing we did on the island was go to the hotel to drop off our luggage. The bad news that greeted us there was that the hotel was overbooked, and was one room short for us. This turned into good news for us, however, as it meant that Ms. Dunbar, Mason and I got upgraded to rooms in the hotel next door, which was much nicer. (Note: We ended up getting put back in the first hotel anyway. Got my hopes up for nothing!). We dropped off our luggage and went to visit one of Adam’s friends, a man named Frank. Frank and his family had owned a family restaurant for generations, and we enjoyed listening to him talk about the traditions that had started there as we learned how to hand-roll our own macaroni. We ate a delicious dinner there, with locally sourced prosciutto, goat cheese, and one of my favorite Croatian dishes, fried zucchini.

After dinner, we had some free time to walk around the town and look through the shops. The boys visited the Marco Polo museum while the girls found some shops selling coral jewelry. After that, we all headed back to the hotel. Tired but excited for our second day in Korčula, we headed up to our rooms for some well needed rest.